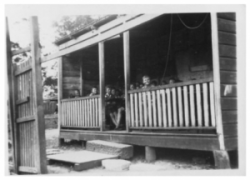 St Joseph’s School Wauchope was founded in 1928 on the arrival of the Sisters of St Joseph.

The Sisters of St Joseph arrived in Port Macquarie at 10.00 pm on 16 January 1928.  They were Sisters Dominic, Baptist, Perpetua and Teresa.  Two days later, on 18 January, the Rev Father P Farrelly (later Bishop of Lismore) drove the Sisters to Wauchope to open a school in the old church building, now the School’s assembly hall.

As enrolments grew, a wing was added in the early days, which was followed a few years later by another wing.  Boarders were quartered in a dormitory beside the convent, accommodating boys only – the first being Bernard Hollis. The School closed to boarders in 1961.

St Joseph’s also catered for Secondary Students, continuing until 1969 when it concentrated entirely on Primary Education. In 1953 after many years of dedicated work, especially by Rev Father John Curran, the Sisters of St Joseph and the people of the district, the modern School as we know it today was opened.

St Joseph’s continued as a Kindergarten to Year 6 Primary School in the hands of the Sisters until the end of 1982 when Sr Pauline Burgess was transferred and its first Lay Principal, Mr Brian McKinnon, was appointed.

At the end of 1984 Sisters, Carol Woodland and Frances O’Leary became the last two members of the Congregation to work in the School when they were withdrawn and not replaced.

St Joseph’s has continued to grow in recent years, which saw the building of two new classrooms in 1993 to accommodate the increasing enrolments.  From a handful of students in 1928, St Joseph’s has grown to a school population of 218 in 2003.

On the 25 May 2003, the last of the Sisters of St Joseph, Lochinvar, withdrew from the Parish. In all, there have been 101 Sisters who have been part of the Parish over the past 93 years.

Following a Farewell Mass, a presentation was made to Sister Ann Gallagher, the last Sister from Lochinvar to reside in the Parish.

In 2004, an undercover COLA (covered outdoor learning area) was designed and erected. The COLA was funded by the P & F.

A prayer garden was also established on the school grounds and was funded by the Year 6 students and their parents.

In 2007, the School received a grant of 1.3 million dollars which was used to upgrade and renovate the school buildings. The upgrade consisted of three new classrooms, an undercover area, a new staffroom block complete with a Server Room to house all technology associated with the computer network and an extension added to the existing Library.

In 2009, Father Paul Gooley was transferred to the Kempsey Parish – leaving Wauchope without a resident Priest.

The Wauchope Parish is now looked after by Priests from the Southern Deanery.

Work commenced on a new School hall and basketball, netball/volleyball court in 2010.

St Joseph’s School Principal Mr Mark Priddis, who has been at the School for 11 years, is appointed new Principal in Kempsey.

In 2011, Sister Sally Camilleri commenced as the new Principal at St Joseph’s School. The school enrolments are now 220.

The new School Hall is completed at a cost of $1.9 million dollars and was officially Blessed and Opened in August 2011 by Bishop Geoffrey Jarrett.

Several Sisters from Lochinvar made the trip to help the School and Parish community celebrate the opening. They were Sr Ann Gallagher, Sr Peter Julian, Sr Louise Marie and  Sr Ellen. The School is very proud of its history and is delighted to still have a strong bond with the Sisters of St Joseph, who show a keen interest in the School and in particular the children.

In July 2012, Sister Sally Camilleri is recalled by her superiors and Mr Ken Ogilvie took over as Acting Principal, with Mr Brendan Kiely taking on the role of acting Assistant Principal.

In January 2013, Father Daniel Redhead is appointed as Parish Priest of Wauchope. Father Dan has relocated from the Brisbane Diocese.

In 2015, Mr Ken Ogilvie retired, and Mr Nigel Toole was appointed to the role of Assistant Principal.

Mrs Trish Coelho was appointed as Education Consultant for the Lismore Diocese in 2017. Principal of St Joseph’s School 2013 – 2016. The old Parish Hall was handed over to the School in 2016 in order to develop this into a flexible and adaptive open classroom space for Stage 3.

Mr Brendan Kiely is appointed School Principal of St Joseph’s School, with the appointment commencing in January 2017. The school enrolments are now 261.

In 2018/2019, the School received two grants from the Catholic Schools Office. Within these two grants, the School was able to renovate the Administration building, previously known as the convent for the Sisters of St Joseph’s. The Stage 3 building previously called St Mary’s church has been redeveloped with additional space and an outside learning environment. Further work has been completed under the main COLA, completing new drainage and resurfacing with soft fall.

In 2020, plans for an extensive Early Learning precinct were being sourced from Capital Grants Works.

List of Priests Who have Served in Wauchope Parish